7. The overall design of the Hill of Hope 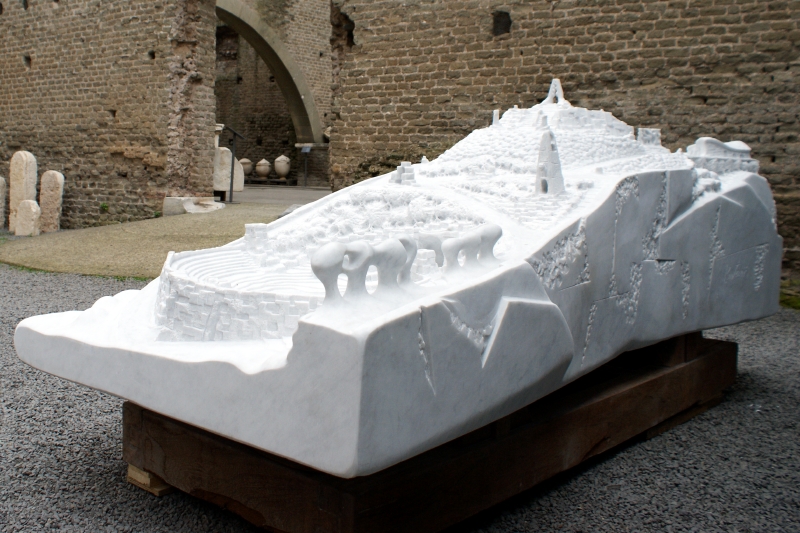 Situated near the area of the Kosanji Buddhist temple at a higher altitude above sea level, the Hill of Hope rises to form an authentic acropolis. In terms of its overall design, it constitutes a structured sculptural park within which a multiple pathway connects various situations. Some of these are of a truly plastic nature, such as the huge sculptures acting as both visual and ideal landmarks, while others are places and constructions connected with various functions of social use. It is crossed internally by numerous paths at different levels. Kuetani exhibited the draft blueprint in the summer of 1998 at Carrara’s 9th International Biennial of Sculpture (IX Biennale internazionale di scultura Citta` di Carrara. Scultura Architettura Citta`), where it constituted an important example in the section on “Great works of environmental sculpture”.

The part of the enormous complex completed so far is the highest part, the actual acropolis, where a pathway leads to the very highest point overlooking the town and the nearby sea. This place culminates in a huge sculpture consisting of two joined elements reached by means of a broad, curving flight of steps. The area rests on a great bed consisting of huge boulders of local stone. On the terrace there is a restaurant, conceived as an enormous inhabitable sculpture.

The part to be completed after 2000 will develop at a lower level and be dominated by an enormous horseshoe-shaped open-air auditorium designed by Kuetani for performances of No theater, Shinto ritual music, opera, weddings and karaoke. The stage is designed as a highly structured plastic situation.

It is planned to erect a great wall outside the theater with a monumental gate providing access to the auditorium itself. This will, however, also determine the way the complex presents itself to the visitor arriving from below. Pathways with trees echoing the local vegetation will lead from the sides of the great wall up to the intermediate level between the lower part with the theater and the upper part occupied by the acropolis. It will be like entering an entirely sculptural city where every element − from the ground itself to the architecture of the walls and buildings, the seats, parapets and steps, up to the culminating presence of the great sculptural works − is conceived in terms of plastic invention, with organic forms that animate the marble and evoke the primal vitality of nature. Kuetani thus seeks to establish a higher harmony to be understood as a genetic unity of form and nature. The imaginative motif is indeed the constant interplay between form and material, between the “formed nature” of sculpture and the “elementary nature” of raw material.

The Hill of Hope enables the visitor to follow an emotionally involving path that runs through a constantly changing plastic scene inducing an elementary and psychologically liberating relationship with form and matter as principles of a more authentic proximity to nature. The work does not therefore constitute a closed citadel that is cut off from the surrounding countryside, but is simply distinguished from it in virtue of its own peculiarly sculptural nature. The work as a whole fits into the mountainous landscape, evokes it in terms of formal analogy, and at the same time exalts it in terms of primal matter. It thus becomes, more extensively, a characterized part of the landscape itself. It becomes nature. The landscape is thus reunited with the sculpture and the sculpture resolves itself into a further aspect of the landscape, another aspect of a rediscovered remoter nature.

Kuetani regards the Hill of Hope as a secular temple of our time where the rite of intimate participation in the spontaneity of nature is performed, a rite involving both visual and tactile participation, not only entry into the scene but also transformation into an element of it. Kuetani’s intention is indeed not to exhibit a sculptural work to be admired in its distant formal consistency, but to create involvement in a close relationship − both physical and psychological − with form and matter, with form that imprints matter with a vital organic movement, emotively exalting an energy that belongs to nature itself and of which man is originally a part. At the same time, however, Kuetani also sees the marble − both modeled and exalted in its raw materiality − offering itself up to the dynamics of nature in a sort of harmonious conclusive restitution. He speaks of the long journey his environmental sculpture is destined to make over the years, during which material and form “are smoothed every day and come to shine thanks to the sun, the wind and the rain (…) absorbing the essence of the air of the places with which it enters into close contact, becoming part of the earth where it must exist.”(19) It is this long journey towards the regained original dimension of nature that restores the boundless dimension of time, of an intimately true time lying beyond contingent everyday cares and influences. I see the striving towards this harmony of life in time above and beyond all contingency as the most authentic sense of the “hope” taken by Kuetani for the title of his greatest work of environmental sculpture.