5. Training in Japan and Italy

While Kuetani was tempered as a man by his childhood in the tragic setting of Hiroshima after the A-bomb, he was trained as a sculptor in Tokyo under the guidance of his uncle, Katsuzo Entsuba, a lecturer at the Tokyo Academy of Fine Arts. Entsuba developed a very free style of figurative work characterized by vivid narrative imagination and open to both traditional and western influences. He also experimented with different materials (wood, bronze and stone) and the various coloristic possibilities they offered. Entsuba’s studio offered the young Kuetani, who started work there in 1957, a training ground in both technical and cultural terms. In this period he developed his knowledge of European sculpture, both ancient and modern, thus laying the foundations for his arrival in Rome in 1969 to attend the lectures of Pericle Fazzini at the Academy of Fine Arts (where he graduated in 1971). At that time Fazzini and Emilio Greco were the contemporary Italian sculptors best known in Japan and constituted (together with Marino Marini in Milan) points of reference for young Japanese artists interested in studying sculpture in Italy. In their different ways, both produced a figurative form of sculpture with elements of modern synthesis. 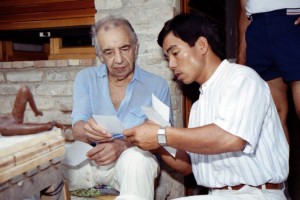 Kuetani began to exhibit his work at the annual Nitten shows in 1962 and held his first one-man show at the Fukuyama Gallery in 1967. His work at that time was of course figurative, but he was interested in forms of synthesis and open to new experiences. In 1974 he worked as Fazzini’s assistant in Rome on a massive bronze relief entitled Resurrection, which was installed in the Audience Hall built a short time before by Pier Luigi Nervi. When he held the above-mentioned one-man show at the Galleria Schneider in 1975, it was as a sculptor involved in work already in tune with the developments in non-figurative avant-garde European sculpture. The work exhibited (which already explored the possibilities of large-sized sculpture on a smaller scale) represents a successfully completed stage in his Italian development from initially figurative work (influenced by the figurative elegance of Greco but also open to Moore’s archetypical syntheses) to the possibility of creating wholly non-figurative forms, albeit with clear analogical overtones.

Within this evolutionary experience Kuetani was certainly influenced by Arp with respect to overtones of plastic organicism and polished surfaces. A more important role in his training was, however, unquestionably played by Moore, as regards both the synthesis of archetypical figurative allusion and − above all, in my view − a freedom to conceive the plastic event as dialectically linked to space through the dialectic relationship of solids and voids. It was, however, his meeting with the heritage of Italian artistic culture − both past and present − that decisively prompted his maturity as a sculptor and stimulated his desire to operate in terms of environmental sculpture. Furthermore, it was in Italy that, after using wood and bronze, he found in stone and marble the material most suitable for his monumental aspirations. (He had already had some experience with stone in Entsuba’s studio.)

For all his interest in Egyptian, classical Greek and Etruscan sculpture, what struck him most in Italy, and of course especially in Rome (where he lived until moving to Carrara in 1974), was the possibility of sculpture as a plastic event connected to architectonic situations, of sculpture offering itself as a plastic episode in the urban context (e.g. sculpted fountains), and hence of sculpture asserting itself in the environmental dimension. He was naturally most influenced by Roman Baroque sculpture (starting with the plastic-architectonic environmental genius of Gian Lorenzo Bernini). Kuetani was also struck by the complexity of the plastic relationship between interior and exterior in the churches (I remember the strong impression made by St Peter’s).

Kuetani’s plastic imagination certainly matured at the level of environmental sculpture under the influence of these historical examples, but was of course also honed through contact with contemporary works. For that matter, from the 1940s on the work of the great sculptor Isamu Noguchi, North American by birth and Japanese in his cultural roots, also includes significant ensembles of environmental sculpture, both planned and actually produced. In Italy in the 1970s Kuetani came into contact with the specific forms of environmental sculpture being developed by a number of sculptors particularly involved in this area, starting with Francesco Somaini and his practical and theoretical reflections on the possible role of sculpture in the context of the modern metropolis. Somaini created plastic events of great emotive impact capable of contrasting the anonymity of the modern metropolis and capturing the attention with all the force of memory and reference to the great themes of life (love, death, sex).(13) Pietro Cascella in particular conceived accessible forms of environmental sculpture and produced highly structured ensembles rich in overtones of an affable relationship with formal elements and material consistencies. He sought to create sculpture of a profoundly dialogical nature with respect to its viewer/user, and employed formal devices with archaic, archetypical, symbolic overtones.(14)

In Italy the problem of the active presence of sculpture in the urban space had indeed already been addressed in the early 1970s at the important event Volterra 73, which I myself organized in this historical Tuscan town together with the sculptor Mino Trafeli in 1973.(15) The cutting edge of environmental sculpture was then and still is represented by the work of Francesco Somaini, Pietro Cascella, Mauro Staccioli and Gio` Pomodoro. All four also made their own powerful and highly personal contributions to the greatest collective architectonic ensemble of sculptures created in Italy during the 1980s, namely Campo del Sole, at Tuoro, a town on the shore of Lake Trasimeno in the region of Umbria (1985-89): a huge tailed spiral (40 meters in diameter) consisting of 27 sculptures/columns with a table/dining-table in the middle, the work of 27 sculptures of different generations and national cultural origins.(16)

Kuetani tells me, however, that Somaini’s strongly organic and dynamic sculptures interested him also in terms of the expression of a vital, plastic energy. For Kuetani this certainly provided confirmation of a primary vocation to delineate in his own sculpture the principle of the organic quality of life, the fundamental element of reference to nature. In this sense he has been able to develop the principle of organicity, understood not as a remote archetype but as an impetuous principle of energy, in more dramatic terms than the modern school of Japanese sculpture (e.g. the work of the great Isamu Noguchi). At the same time, he has managed to combine it in masterly fashion with a wholly oriental sensitivity to the animistic quality of the material, especially stone, always regarded by Kuetani as a part of original nature.

In this way Kuetani’s training, highly sensitive to western sculptural culture as a whole, both historical and contemporary, achieved reconciliation with his own different cultural origin. The deep sense of a return with nature, which plays a fundamental role in Kuetani’s sculpture, is in fact typically oriental and firmly rooted in Japanese culture both past and present (as shown again in the masterworks of Noguchi). It is, however, precisely an intelligent reworking of the influences of the western sculptural tradition that has made it possible for Kuetani to tap in more markedly dialectical fashion – and of course eschewing any temptation to indulge in superficial traditionalistic overtones – the deepest reasons underlying his different cultural heritage. He is thus capable of work – both object-sized and even more so on the environmental scale – that cannot be mistaken for work by a western sculptor despite the fact that it fully addresses the most significant issue facing sculpture today, namely environmental sculpture. Typical of Kuetani – and typical of the animistic oriental mentality – is the quest for dynamic equilibrium in the relationship between the contrasting primal forces of life and nature, which corresponds to the desire for a return to an original, natural unity making it possible once more to tap the deep joy of sensitive relations and psychic equilibrium.