1. The Kosanji Temple Hill of Hope 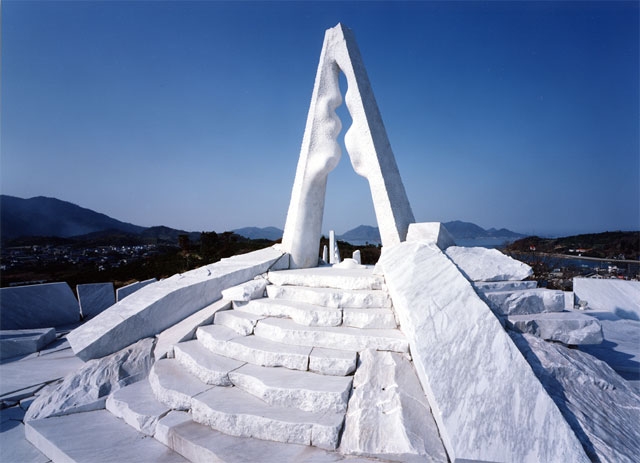 The landscape is sculpted throughout to form a dazzling totality of white marble, variously negotiable through constant changes in level, offering countless accessible close encounters, all-enveloping like a finely crafted total environmental situation and yet, at the same time, a stage looking out onto the surrounding landscape of mountain green and sea blue. Here, in its totality as human artifact, the sculpture itself turns back into nature, distinctly measuring itself against but also at the same time finally resolving itself into the jagged natural mountain landscape in which it is situated. Kazuto Kuetani has been building the Hill of Hope at the Kosanji Buddhist temple at Setoda-cho in the province of Hiroshima in the Toyota district since 1993. At the stage reached by April 2000, when it will actually be only half-finished with respect to the overall plan, it will unquestionably constitute one of the largest “ensembles” of environmental sculpture created in the twentieth century and handed over to the new century as a pledge of hope. The work is built entirely of Carrara marble and extends at the top of a hill over an elongated area measuring 65 meters in width by 160 in depth and 25 in height. Kuetani has been working the marble himself at Carrara for over fifteen years, and sends it by sea in containers.

The ensemble presents itself as an immense acropolis (modeled on the sort of overhanging religious edifice typical of ancient cities in Greece and Italy) that immediately stands out visually in its soaring plasticity and in the chromatic impact of its gleaming whiteness against the surrounding mountain vegetation in which it is embedded. In its majestic primordial materiality of natural stone, it creates an up-to-date alternative that is, however, at the same time also like an echo of a remote primeval time with respect to the cultured and decoratively sophisticated architectonic complex of the nearby Buddhist temple. This huge and wholly practicable site of animated plasticity offering total and multiple accessibility is to be relished not only in its more specifically dedicated episodes of plasticity (the great sculptures) but also in its episodes of wholly plastic architectonic construction, and in its recurrent minor context (benches, walls, parapets, stairs, pavement). It thus provides a continual alternation between possible visual appreciation of form and construction, and the immediate tangibility of its recurrent constituent material.

In its highly ramified environmental structure developed over several levels, the site thus presents a dense plastic fabric of extremely disparate episodes: strictly plastic elements such as the huge sculptures constituting points of symbolic, emotive and visual reference; a number of edifices conceived as enormous inhabitable sculptures; and an extraordinarily varied context of open spaces, pathways, stairs, ledges, walls and minor characterized plastic situations. All in all, it constitutes an immense and highly structured plastic event of multiple accessibility offering a constant wealth of possible surprises, discoveries, and episodes. It is capable of arousing strong emotions and evoking multiple archetypical memories; conducive to reflection, meditation and psychological liberation.

You enter as though scenically admitted to a new, primal, revealed form of nature whose negotiability is emotionally more intense and immediately evocative than the surrounding mountain greenery. In short, it is as though you were entering the theater of nature enhanced by the imagination and propelled into a boundless temporal dimension between the unlimited inebriating whiteness of the marble and the broad sky. As though you were in a scene that is constantly renewed as you move through it with an increasing sense of participation, not a guest but an actor. A scenic situation whose constant inventive plastic stimulation asserts the sense of human constructive capacity and creativity, but which is also marked by the strong and indeed urgent force of a primal idea of nature itself, as though you were plunged into boundless temporal depths inducing reflection upon the origins of life itself.

The part completed so far corresponds to the upper part of the great plastic-architectonic ensemble of the Hill of Hope, the part that presents itself as an acropolis with respect not only to the Buddhist temple but also to the nearby town on the sea below. Once the entire plastic-architectonic ensemble has been completed, this part will constitute the climax of the itinerary, the goal of the imaginative plastic route that develops through a succession of different levels in accordance with a morphological structure that appears to follow the natural tectonics analogically rather than a rational abstract blueprint. This is also the part where the whiteness of the marble becomes most absolute and psychologically disconcerting, and the minor contextual plastic elements reach their peak in terms of episodic discursive affability. It is also the point where the pathway marked out by the latter ends in the almost solemn meeting with the great sculptures, which constitute situations where the emotive and evocative stimulation suddenly becomes far more intense and the archetypical references become more explicit.

The most significant and demanding sculpture is found at the top of the acropolis, situated on a sort of peak that is reached by broad curving flights of steps. It is a sculpture that presents the archetypical image of two vertical structures that join at the top to constitute a sort of open and accessible pyramid or doorway, what one might call an initiatory gateway to the heavens. It displays geometrical structures on the outside and organic structures on the inside, whose meeting at the apex is the sign of balanced and convergent contact between two energies. Conversely, this contact remains unattained in the other great work placed at the entrance to the acropolis on the other side, a sculpture in which two towering plastic structures of unequal height have not yet achieved a balanced relationship with one another.

Other large sculptures, which prove to be double-sided reliefs of totally organic structure almost as though molded by the wind, are arranged near the sculptural edifice erected at one end of the acropolis. Situated at the peak of the plastic-architectonic ensemble, this area also contains other plastic elements in the shape of broken columns, defined forms that almost appear to have been subjected to the violence of time or nature itself, as well as other strong plastic presences in the shape of rough-hewn marble masses suggesting raw, brute nature. At the same time, the entire environmental context of the vast acropolis is conceived as creating itself precisely in a continuous reciprocally stimulating relationship between the raw materiality of rough-hewn blocks of marble (including those arranged to form walls), slabs of pure natural matter, the polished surface of the large irregular slabs of the marble paving, and numerous other episodes of variously characterized plasticity both major and minor, some of which form functional elements like chairs and tables.

Everything prompts an imaginative and tactile negotiability and accessibility that is highly participatory and hence liberating in the creative sense. Indeed each of the plastic situations present serves to stimulate through a range of evocations either as a “formed” plastic entity or as a piece of raw unshaped natural matter. Visitors walking through this huge open space are thus constantly prompted in both visual and tactile terms to follow the movements of form and learn the morphology of matter. The first refers emotively to the idea of a primal organic structure reuniting man and nature; the second displays the evident power of nature in its primeval materiality. The juxtaposition of form and matter triggers a debate that ultimately constitutes the dialectic of life itself. In Kuetani’s own words: “As there are various contrasts in everyday life, contrasts between mountains and sea, between straight lines and curves, between light and darkness, and between solid and void, my plastic art is composed of two contrasting parts, namely the brute force deriving from nature and smooth curving voluminosity.”(1)

Those penetrating the Hill of Hope are thus emotively enveloped in the fascination of plasticity and the fascination of materiality. And the common denominator is the dazzling white of the Carrara marble – a rare material in Japan – which evokes classical memories of sculpture while at the same time constituting a piece of nature. This total whiteness is disconcerting in both visual and psychological terms. It leads the visitor to a rapturous temple-like state of holiness, thus accentuating the atmosphere of the place and introducing an element of revelation that heightens the archetypical evocative power of the plastic components and endows them with a lightness born of bewilderment.

Kuetani offers the following account: “It is like a temple of the twenty-first century, where you can forget your ego and participate in the spontaneity of nature. (…) for the future, a memorial of our times that will live forever. By transporting countless pieces of marble, large and small, to the place I seek to create islands that float on the sea and various mountain forms so that the landscape becomes a part of the sculpture and the sculpture resolves itself into landscape.”(2) The Hill of Hope naturally constitutes Kuetani’s greatest environmental sculpture to date, and probably for all time, the fulfillment of his personal dream of creating of an environmental work of vast scale capable of challenging time materially and nature morphologically. It represents the point of arrival of the career of a sculptor primarily concerned with operating on the environment, of an adventure that has stretched through the 1980s and 1990s and been marked by numerous creations primarily in the context of Japanese cities.